Doc Searls’ Buzz Phraser is an hilarious tool that lets you produce and share Mad Libs type phrases that come scarily close to sounding like all that gross overblown bumph and bafflegab written by bureaucrats. 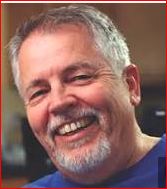 The original BuzzPhraser was created in 1992 as a spreadsheet, then a HyperCard stack; and it quickly became one of the most-downloaded files on both AOL and Compuserve.  For years after that it languished, mostly because I didn’t want to re-write the software.  But when the Web came along, I knew I had to find a way to re-create it.  The means didn’t find that end, however, until Charles Roth grabbed the buzzwords by their serifs and made it happen, using a bit of clever Javascript.  Once you start having fun with the new BuzzPhraser, I’m sure you’ll thank him as much as I do. The story that follows was written for the original BuzzPhraser.

BuzzPhrases are built with TechnoLatin, a non language that replaces plain English nouns with vague but precise- sounding substitutes. In Techno Latin, a disc drive is a “data management solution”. A network is “work group productivity platform”. A telephone is a telecommunications device”

Thanks to Techno Latin, today’s technology companies no longer make chips, boards, computers, monitors or printers.  They don’t even make products.  Today everybody makes “solutions” that are described as “interoperable,” “committed,” “architected,” “seamless” or whatever.  While these words sound specific, they describe almost nothing.  But where they fail as description they succeed as camouflage: they conceal meaning, vanish into surroundings and tend to go unnoticed. Take the most over-used word in TechnoLatin today: solution.  What the hell does “solution” really mean?  Well, if you lift the camouflage, you see it usually means “product.”  Try this: every time you run across “solution” in a technology context, substitute “product.”  Note that the two are completely interchangeable.  The difference is, “product” actually means something, while “solution” does not.  In fact, the popularity of “solution” owes to its lack of specificity.  While it presumably suggests the relief of some “problem,” it really serves only to distance what it labels from the most frightening risk of specificity: the clarity of actual limits.

The fact is, most vendors of technology products don’t like to admit that their creations are limited in any way.  Surely, a new spreadsheet — the labor of many nerd/years — is something more than “just a spreadsheet.”  But what?  Lacking an available noun, it’s easy to build a suitable substitute with Techno Latin.  Call it an “executive information matrix.”  Or a “productivity enhancement engine.”  In all seriousness, many companies spend months at this exercise.  Or even years.  It’s incredible. There is also a narcotic appeal to buzz phrasing in Techno Latin.  It makes the abuser feel as if he or she is really saying something, while in fact the practice only mystifies the listener or reader.  And since buzz phrasing is so popular, it gives the abuser a soothing sense of conformity, like teenagers get when they speak slang.  But, like slang, Techno Latin feels better than it looks.  In truth, it looks suspicious.  And with good reason.  Techno Latin often does not mean what it says, because the elaborate buzz phrases it builds are still only approximations. But who cares? Buzzphrasing is epidemic.  You can’t get away from it.  Everybody does it.  There is one nice thing about Everybody, however: they’re a big market.

So, after studying this disease for many years, I decided, like any self-respecting doctor, to profit from the problem.  And, like any self-respecting Silicon Valley entrepreneur, I decided to do this with a new product for which there was absolutely no proven need, in complete faith that people would buy it.  Such is the nature of marketing in the technology business.

But, lacking the investment capital required to generate demand where none exists, I decided on a more generous approach: to give it away, in hope that even if I failed to halt the epidemic, at least I could get people to talk about it.

With this altruistic but slightly commercial goal in mind, I joined farces with Ray Miller of Turtlelips Services to create a product that would encourage and support the narcotic practice of buzzphrasing.  Being the brilliant programmer he is, Ray hacked it into a stack in less time than it took for me to write this prose.  And now here it is, free as flu, catching on all over the damn place.

What made BuzzPhraser possible as a product is that the practice of buzzphrasing actually has rules.  Like English, TechnoLatin is built around nouns.  It has adjectives to modify those nouns.  And adverbs to modify the adjectives.  It also has a class of nouns that modify other nouns — we call them “adnouns.”  And it has a nice assortment of hyphenated prefixes and suffixes (such as “multi-” and “-driven”) that we call “hyphixes.”

Since the TechnoLatin lexicon is filled with meaningless words in all those categories, the words that comprise TechnoLatin buzzphrases can be assembled in just about any number or order, held together as if by velcro.  These are the rules:

Here is a diagram that shows how the rules work:

As with English, there are many exceptions.  But, as with programming, we don’t make any.  So cope with it.

With one adverb, one adjective, two adnouns, a noun and a prefix, you get “backwardly architected hyper-intelligent analysis inference leader.”  With an adjective and two nouns, you get “interactive leverage module.”  Put together buzzphrases of almost any shape and length:

The amazing thing is that all of these sound, as we say in TechnoLatin, “virtually credible.”  And one nice thing about the computer business is — thanks largely to the brain-softening results of prolonged TechnoLatin abuse — “virtually credible” is exactly what it means in plain English: close enough.

BuzzPhraser makes “close enough” easy to reach by substituting guesswork for thinking.  Just keep hitting the button until the right buzzphrase comes along.  Then use that buzzphrase in faith that at least it sounds like you know what you’re saying.  And hey, in this business, isn’t that virtually credible?

Stewart Alsop, who published “Random Strings of TechnoLatin” along with the original Generic Description Table in both the Preceedingsand Proceedings of Agenda 90; and who would like an e-mail front end that automatically discards any message with too many TechnoLatin words and buzzphrases.

Spencer F. Katt of PC Week, who devoted parts of two consecutive rumor columns to the Table, and posted it on the magazine’s CompuServe bulletin board, from which so many people copied it that I thought there might be something going on here.

Guy Kawasaki, who told me “this needs to be a product.”

Bob LeVitus, who told me “you ought to get this hacked into a stack.”

And Ray Miller, who did it.  Beautifully.