The plan for Doncaster Hill to become a self-sustaining village with wind turbines and solar panels on apartment buildings could have increased the purchase price of apartments by as much as ten per cent with a zero impact on global warming had Manningham Council not scrapped the plan. 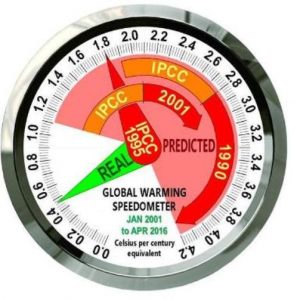 Lord Monckton speedometer shows a 15 years 4 months January 2001 to April 2016 at [1.1, 4.2] C°/century-equivalent interval of global warming rates (red/orange) that IPCC’s 1990, 1995 and 2001 reports predicted should be occurring by now, compared with real-world, observed warming (green) equivalent to less than 0.5 C°/century over the period.

RSS and UAH monthly near-global satellite lower-troposphere temperature anomaly values for each month from January 2001 to April 2016 were assumed to be broadly accurate and were averaged. The least-squares linear-regression trend on their mean was determined and found equivalent to 0.47 C°/century.

Ex-warmist Lance K writes, “The forecast by Al Gore, who shared a Nobel prize with the IPCC, that the Antarctic ice

would melt by 2014, has proven to be a farce and so too have the exaggerated predictions made by the IPCC as illustrated by the above warming speedometer and commentary by Lord Monckton of Brenchley”. 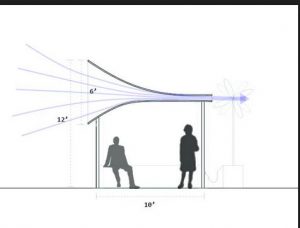 “The long pause in global warming over the past twenty years has shown how exaggerated the predictions of IPCC and Nasa’s of human caused warming have been and how little correlation it has with concentrations of the atmospheric trace gas carbon dioxide”.

“In what was later called a “typographical error”  that very nearly scuttled the Paris climate “agreement”.  The French presidency had presented its final “take it or leave it” Paris agreement text, adoption of the text should have been a formality. However, it soon became clear that something had gone very wrong in the wording. The US lawyers had found that the wording in the agreement could make the difference between rich countries being legally obliged to cut emissions rather than just having to try to: “shall” rather than “should”.

“The Americans said that if the word ‘shall’ was introduced, the Congress would not pass it.  The delegates said that they have done so many things to get the US on board and they were diluting everything. In this case they were diluting something which was a super-red line”. So the US had its way with the wording later described as an unfortunate “typo”

Leave a Reply to Anne and Eric Cancel reply