The Manningham Transport Committee have decided not to pursue a light rail extension from North Balwyn to Doncaster Hill because it believed it would compromise attempts to secure heavy rail to the City via the Eastern freeway. But it had already been decided long ago it would be buses only for Doncaster Hill and Manningham have been told to stop tugging in other directions. 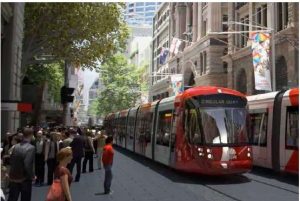 It is the politicians who have kept the prospect of a heavy rail service to Doncaster Hill alive by arranging rail studies now and then as part of  their election campaigns despite the fact that, like all the proposals over the past 100 years, it could never be justified on a cost effective basis.

There are also difficulties for the supporters of a light rail extension from North Balwyn and a line direct to the City via the freeway because the state government has no money. Even though, at a cost of approximately $2 Billion, including rolling stock,  it would be a fraction of the cost of constructing heavy rail which could only go as far as Doncaster Park and Ride anyway because of the

high cost of tunneling up to Doncaster Hill. In contrast the light rail service would travel in the centre of Doncaster Road and could start immediately and be completed within three years if funds were made available.

Manningham executives had commissioned a consultant who said Doncaster Road was to is too steep even though their own geographical information system (GIS) data suggested otherwise. The council’s GIS data shows only a 480m section of Doncaster Rd rises above a 5 per cent gradient, from the Eastern Freeway to Golf Hill Ave,  after that that section  Doncaster Road levels out. It was a cop out because the nearby Riversdale Road Tram easily negotiates a long stretch with a gradient of 7%.

Consistent market research and experience over the last 50 years in Europe and North America shows that car commuters are willing to transfer some trips to rail-based public transport but not to buses. Typically light rail systems attract between 30 and 40% of their patronage from former car trips. Rapid transit bus systems attract less than 5% of trips from cars, less than the variability of traffic. Whether or not these percentages would be repeated if a light rail was introduced in Doncaster is not known but at the very least we would have a permanent connection to the Melbourne tram network.

A Light Rail / Tram service would offer an effective public transport alternative in the East. Constructed to modern LRT standards in a separated Right of Way along the medians of the Eastern Freeway and Alexandra Parade, large Light Rail vehicles can carry 300+ occupants and 8,000-10,000 passengers per track per hour in peak periods, an effective and fast alternative mode of public transport through the Doncaster Corridor.
While Light Rail could fill the current gap in Melbourne’s existing radial heavy rail network in the East, at the same time it has the flexibility to link into Melbourne’s tram
network at both ends of its journey – Balwyn/Doncaster Hill and Fitzroy. When operating
as a tram route at the Fitzroy end, it would provide access and public transport connection
throughout the inner city and CBD for residents of Melbourne’s North East.
It can adapt to the number of passengers by adding more cars during rush hour (and removing them during off-peak hours). No additional driver is then required for the trip in comparison to buses

In general, provides a higher capacity service than buses. Multiple entrances allow loading faster than suburban coaches, which tend to have a single entrance. This, combined with swifter acceleration and braking, lets trams maintain higher overall speeds than buses, if congestion allows.  Stops in the street are easily accessible – unlike stations of subways and commuter railways placed underground (with several escalators, stairways etc.) or in the outskirts of the city center. Rights-of-way facilities are narrower than for buses. This saves valuable space in cities with high population densities and/or narrow streets. Passenger comfort is normally superior to buses because of controlled acceleration and braking and curve easement. Rail transport such provides a smoother ride than road use by buses.