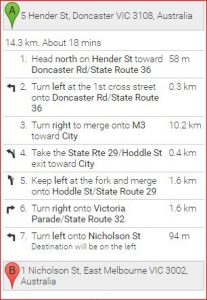 But the website of the “Nest at the Hill”, a major apartment development opposite Westfield shopping centre, at 642 Doncaster Road, Doncaster Hill, have made no bones about accurately stating that the complex is a 18.9 km driving distance from the Melbourne CBD (actually the GPO) and 2.4 km from Park and Ride,  on western border of  the Manningham Municipality.

John S wrote;  “Manningham Council, usually a stickler for accuracy and impartiality, appear to want to create an impression that 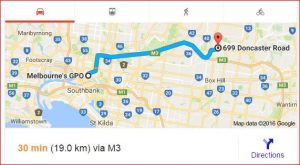 “The 10 km distance they refer to on the Manningham website is understated.The 10 km arc in the Melways directory runs through Bulleen near the eastern freeway which is 13.69 kilometers driving distance to the Melbourne GPO from the border of Manningham however there is no high density development in that area and would not be much good for residents from the Doncaster High Rise apartments five kilometers away who would travel past that point on their way to the city. It would be very confusing for many people because distances are often measured to or from the Melbourne GPO. In other material published on their website council are saying that Doncaster Hill is a straight line distance of 12 km from the Melbourne Central Business District but it is actually 15 km. The road distance from the Melbourne GPO to Manningham Council offices is 19 km via the eastern freeway”.

“Council may not be subject to the law relating to misrepresentation, as in private enterprise, but when dealing with overseas buyers not familiar with the area, it is all the more reason to avoid giving incorrect information on its website that could induce a party to make a contract, which might rely on what council have represented and suffer loss as a result, where a party in the private arena would normally claim damages”