Oversupply, poor transport, tougher lending conditions and higher mortgage rates, particularly for investor loans, are contributing to the free fall in Doncaster Hill apartment prices. Median property valuations in Melbourne and Sydney are expected to drop by up to $1000 a week this year with additional falls in 2019, Shane Oliver, chief economist of AMP Capital, told the Financial Review.

The Bunnings three stage development on Doncaster Hill could be a risky venture for Wesfarmers who have just abandoned its disastrous attempt to expand its Warehouse chain into the United Kingdom and Ireland, and have sold the business for a single British pound after having invested $705 Million.

The Doncaster Road proposal, is to be built in three stages. The first stage, which was to have started early last year, will include the construction of

the Bunnings store itself plus 99 of  the proposed 258 apartments and associated parking. 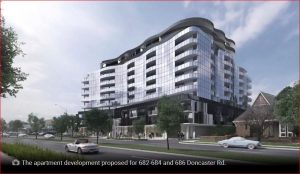 The sobering predictions for residential property are not encouraging where prices have already been slowing or falling since last year, and the weekly pilgrimage to Bunnings for a browse and a snag-in-bread may be losing numbers fast, with Morgan Stanley analysts predicting the hardware retailer’s sales growth will halve this year as a result of cooling house prices. Increasingly cautious consumers and growing pressure on household cash flow are likely to see spending on home improvement fall from the lofty highs seen during the peak of Australia’s capital city property price boom, according to Morgan Stanley stock analysts.

Apartment prices could fall harder than house values this year, dropping by 8 per cent in Melbourne, and 4 per cent in Sydney, according to Capital Economics. 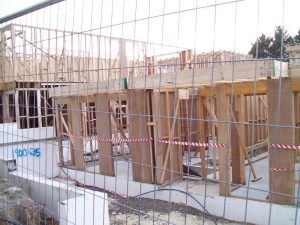 “While prices may only edge lower this year and next, higher interest rates will probably mean they fall more sharply in 2020 and 2021,” chief economist Paul Dales wrote in an analysis on Tuesday. “Units look much more vulnerable than single dwellings, while Melbourne appears to be the most exposed of the eight capital cities.” Melbourne apartments price inflation could fall to negative 8 per cent by late this year, double the forecast fall in Sydney. Brisbane apartments could also be hit, dropping to negative 7 per cent by the end of this year. The forecast for house values is more robust. Capital Economics expects Sydney house price inflation to improve from here, returning to zero growth by later this year. The slowdown is still working through the Melbourne house market, with prices, now up 5.3 per cent, to fall to negative 5 per cent by late 2018.

Click on link below for price list of Pinnacle apartments, (632 Doncaster Road), back in March 2011 for comparison with the asking prices of today. $539,000 | Private Sale | 04/06/2018. This two Bedroom apartment was purchased for $553,000 in 2011. The original plan was for 124 apartments plus a motor vehicle sale showroom. A subsequent amendment deleted the showroom to enable an increase of 38 apartments to provide for a total of 161.