Forced Car Ownership’ (FCO) describes low income households with high car ownership, resulting in a high proportion of their income going to their cars. The cost of running multiple cars, combined with housing costs, puts considerable stress on low income households. Monash Institute Research has identified that FCO is one of the most prevalent social and the economic problems in Australian cities. 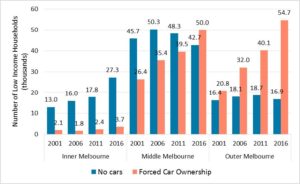 Click On Above Graph. The aim of this study was to explore whether trends in FCO have continued or even accelerated over time. The 2016 census provided an opportunity to explore whether this concerning trend is continuing. The above graph shows that the increase in FCO households is occurring in all regions of the city but it is most notable in the middle and outer areas of Melbourne’s suburbs. In contrast, no-car households are decreasing in these areas and increasing in inner areas. 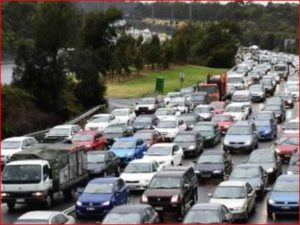 Furthermore, FCO households now outnumber low-income households with no cars, particularly in Middle and Outer Melbourne. The paper discusses the policy failures that have caused these outcomes, suggests solutions and identifies areas for future research to better understand the problem and its impacts

The car is firmly entrenched in Australian society, with over 92% of households owning at least one motor vehicle (Australian Bureau of Statistics, 2016). Although cars provide considerable mobility they also impose significant financial costs on households, particularly low-income households. _Forced-Car-Ownership-in-Melbourne-

‘Forced Car Ownership’ (FCO) is a term originally developed in the UK to describe low income households who have little choice but to own and use cars for mobility because there are few alternatives available:
“Voluntary’”car ownership means that there are adequate substitutes for gaining access to facilities, and that the car is not a necessity. Conversely, ‘forced’ car ownership means that there are no alternatives… cars are seen to be one of the items of household expenditure that cannot be foregone”.
In the Australian context, FCO has been strongly associated with low income households on the urban fringe of major cities. Evidence has shown that FCO is associated with ‘Transport Poverty’:
“Transport poverty occurs when a household is forced to consume more travel costs than it can reasonably afford, especially costs relating to motor car ownership and usage”

Forced Car Ownership is a significant and growing problem. In Melbourne, among low income households you are more likely to live in a Forced Car Ownership household than in a household without a car . Furthermore, FCO households are growing in number; in the 10 years between 2001 and 2011 there was a 93% increase in FCO households. Perhaps more significantly, the share of low income households experiencing FCO increased from 22% in 2001 to 28% in 2011. Most of these increases were in Outer Melbourne, where walk distances are longer and where the provision of public transport is much poorer or non-existent.
The recent 2016 census provides the opportunity to explore whether this concerning trend is continuing. The aim of this paper is to explore whether trends in FCO have continued or even accelerated relative to previous years. It starts with a discussion of the research context. Research method is then outlined and results described. The paper finishes with a discussion of the implications of the results and conclusion including suggestions for future research.

There is a long history of exploring how the lack of car-based transport influences economic and social outcomes. Only more recently has there been a focus on how car ownership can put its own strains on low-income households. The earliest work in this area referred to the financial burdens of car ownership in rural UK areas. After a gap of some years, this theme was picked up in Australia where a significant portion of lower-income households live on the urban fringe of cities (38% in 2016 Melbourne, based on authors’ analysis (Australian Bureau of Statistics, 2016)). In these locations, where public transport and walk access are usually quite poor, owning one or more cars provides essential mobility to work, schooling and social opportunities. However, the cost of running a car, combined with housing costs, put considerable stress on lower-income households