The fact that oil is a “finite” material is not a problem. Every material is finite. Life is all about taking the theoretically finite but practically limitless materials in nature and creatively turning them into useful resources. The fossil fuel industry does it, renewable actually, the unreliable energy industry doesn’t.

“it is commonly assumed that green house gas and energy can be solved by switching from fossil fuel sources of energy to renewables”. “However, little attention has been given to exploring the limits of renewable energy”

Unfortunately, people working on renewable energy tend not to throw critical light on the difficulties and limits”. “They typically make enthusiastic claims regarding the potential of their specific technologies”……… ……..quote by Alex Epstein.

Solar and wind technology, after 50 years of subsidies, produces less than 1 percent of the world’s energy—and, because the sun and wind provide only intermittent energy, continue to require fossil fuel backups. The issue of

intermittency from solar and wind means that is difficult to get reliable power from either as it is weather dependent – which, particularly in Ireland is unpredictable. This creates a need for energy storage (which is currently not efficient enough to be cost effective) or needs traditional fossil fuels or nuclear power to supplement. 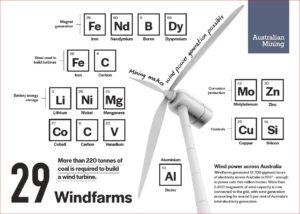 220 Tonnes of coal to manufacture turbine

“As you look at the jagged and woefully insufficient bursts of electricity from solar and wind, remember this: some reliable source of energy needed to do the heavy lifting. In the case of Germany, much of that energy is coal. As Germany has paid tens of billions of dollars to subsidize solar panels and windmills, fossil fuel capacity, especially coal, has not been shut down—it has increased. Why? Because Germans need more energy, and they cannot rely on the renewables.” (Alex Epstein)

The global warming authorities had warned policy makers that wind energy would be an extraordinarily expensive and inefficient way of reducing CO2 emissions. They require a huge commitment of investment to a technology that is not very green, in the sense of saving emissions, and it was entirely probable that annual savings on emissions could be negative when all contingencies are considered

Energy Minister Taylor said large-scale renewables ­projects would not receive any further government support. “The clean energy industry has assured us that the cost of renewables is now competitive with alternatives so we would expect investment to continue in the ­absence of subsidies,” “An industry that is now ­competitive shouldn’t require ­additional subsidies. Nearly 70 per cent of Aus­tralia’s electricity was from coal-fired power this year, compared with 22.6 per cent from renewables.