ANTHROPOGENIC WARMING ABOUT ONE DEGREE ABOVE PRE-INDUSTRIAL LEVELS

But what if global temperatures exceed the tipping point for one or two years and then drop away like they have in the past, just as they had during the thirty nine year cooling period that took place between 194o-1979, despite a rapid increase in GHG emissions due to car and arms production or the longest period of 20th century warming that happened between 1910 to 1939 when emissions remained stable.

which is similar to NOAA who estimated 13.72 C for the period. 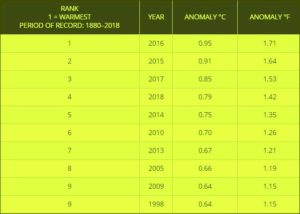 Scientists at the Met Office Hadley Centre and at the University of East Anglia’s Climatic Research Unit produce the HadCRUT4 dataset, which is used to estimate global temperature. The HadCRUT4 global temperature series shows that the average of January to October 2019 was 1.04±0.1 °C above pre-industrial levels, taken as the average over the period 1850-1900, and/or by adding 0.43±0.1 C to the 1981-2010 average, which according to their temperature data is 14.28 C and you get 14.71 C as the likely 2019 temperature. So if you subtract 1.04 C from 14.71 C the estimated average for the pre-industrial period is 13.670 C.

Special thanks to Jennifer for attachment and her efforts in contributing to this item.