US Judges ruling on appeals from US states, highlighting corrupt voting practices, had conceded there might have been fraud committed in each of the swing States: Nevada, Arizona, Georgia, Pennsylvania, Michigan and Wisconsin but not enough to have changed the result of the election. How could they possibly know that? The video below shows four people remaining in the room after ballot paper counting in a Georgia county hall had been suspended for the night due to what they said was a water leak. We were later to learn it was nothing more than your every day leak in the toilet basin. Everyone else including officials, the press and scrutineers were asked to leave the counting room. And then, huge, statistically impossible vote dumps and double counting occurred, giving Joe Biden the lead. This pattern, was repeated but ONLY in the states where Biden had to reverse the results, and hadn’t occurred in previous elections, points to a coordinated effort to steal the election. The degree and scale of what appeared to be voter fraud was unprecedented where the republicans had held large leads on election night. Enlarge video below

The graph below shows the early morning spike for Biden at the exact time the illegal votes were dumped in the Georgia county. The following link shows one of the workers counting the same stack of ballots for a third time! https://twitter.com/i/status/1335027487357616128 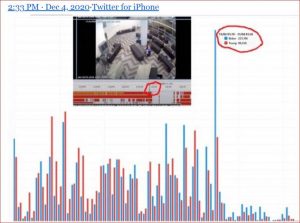 This “victory” will allow the Biden administration to prepare itself to conform to The Great Reset, by recommitting to the Paris Accord and installing a carbon tax, becoming vegans and having open borders. What has not been mentioned is the warning from the Marxist group BLM who have promised to loot and burn if republicans are re-elected….POOR AMERICA!