British Met Office had announced, prior to the postponing of Glasgow Climate Summit which was to be held in November last year, that the average global temperature forecast for 2020 was 14.95 C, after the temperature anomaly of 1.28 C was added to the pre-industrial level of 13.67 C, the second highest ever and only 0.22 C short of the 15.17 C, that the Intergovernmental Panel on Climate Change tell us is the cut off point, which could be reached if a similar increase were to occur this year. 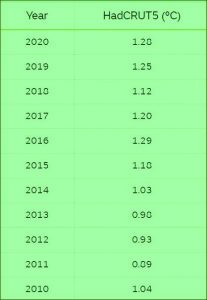 This is all very interesting but what bothers me is the reliance on the State Of The Art and the accuracy of measuring temperature techniques and record keeping especially back in 1850-1900 which we are relying on as a starting point to calculate the amount of warming. Even Tom Karl of NOAA who was instrumental in the success of the Paris Accord by proving that sea surface temperature measuring was much warmer due to a new technique he had adopted back in 2015.

HadCRUT5 global temperature series, produced by the Met Office, University of East Anglia and the UK Centre for Atmospheric Science have increased all their anomalies by as much as 20%. Data from a number of climate monitoring centres including the Met Office, NASA  and NOAA are compiled by scientists at the Met Office for the World Meteorological Organisation (WMO) to create its central annual global mean temperature estimate.

The collection of datasets that make up the WMO figure all show that the previous 10 years were the warmest on record. In addition, they also all place 2020 in the top three years on record. 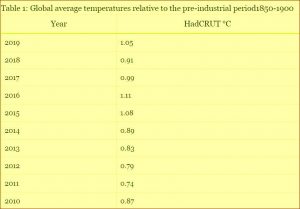 Anomalies Before Being Increased

These raised anomalies will heighten the concern that we are now drawing ever closer to the 1.5 C above the pre-industrial level that climatologists keep warning us about. If the global temperature for 2020 at 14.95 C is correct, it would only require another 0.22 C of warming to reach the point when the global temperature is 1.5 C above the pre-industrial levels of 13.67 C.

How a seemingly small change in average temperatures could trigger lasting changes for life as we know it. Why is holding global warming to 1.5 degrees Celsius such a big deal? Many people think of the hottest days of the summer where temperatures already hit 40 degrees (that’s 104 degrees Fahrenheit) where they live – or hotter.

When we talk about 1.5 degrees of warming, we’re talking about the increase in the Earth’s average temperature. We measure this increase from a baseline average temperature in the mid-to-late nineteenth century – when the Industrial Revolution swung into high gear and people began burning fossil fuels on an unprecedented level, jump starting climate change but the 35 years of cooling from 1944 to 1979 industrial activity reached a new level with a large increase in CO2 emissions but no one has explained why there was no warming in this period!