Objecting To Council Registers your Concerns.

This process is the normal way to raise issues, and is encouraged by council.The Objection form below is from the Manningham council website.

Please use these to voice your concern – Instructions are included. Fill out the form and mail or e-mail it in.

The Next apartment block might be next to you !  Sample letters are also below, and at the bottom of this page.

pln191_Objection_Form     This version of the form can  be typed in  pln191 MANNINGHAM CITY COUNCIL Objection FORM Blank You may need to “save file as” on your PC to get started. 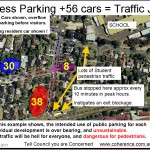 Curlew Court development WAS REFUSED  by Council July 26th 2011 – they Voted with the Residents.

The Builder took it to VCAT (lodged an appeal)… We all went to VCAT – won some concessions, but this one got through.

The examples Below should help you get YOUR battle together.

Reasons to Object to 5-7 Curlew Court. 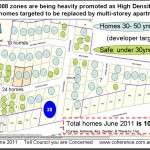 Curlew Court Plans and the builders submissions to council. Go to Council and look over yours – Ask for a copy to take home or get it  emailed to send on to others.

Objection from a concerned resident to the Council…

Objection to Grant of Planning Permit

Description of the proposal:        Construction of a three-storey apartment building comprising 30 apartments and basement car parking for 36 vehicles

Curlew Court is a quiet, homogeneous, cul-de-sac comprised of pleasant dwellings predominantly single storey in height and with off-street car parking. The proposed 3-storey building would be detrimental to, and out of character with, the area by virtue of its architecture and particularly by its size.

For 7 days a week and throughout each day there is significant traffic movement around Doncaster Secondary College. Thiele Street, but especially Ibis Street and Church Road are particularly affected. Other groups use the school on Saturdays and Sundays. Traffic and student movements occur throughout the day and are increased by school meetings, or gatherings at the school theatre. Ibis Street is also used as a connector street to and from Thiele Street, Church Road and Doncaster Road.

The new 38-apartment building on the corner of Doncaster Road and Thiele Street, although by no means fully occupied at present, has added to the dangers and traffic congestion around the area in question, especially in Thiele Street, between Doncaster Road and Curlew Court, where cars are parked on both sides of the street leaving only one centre traffic lane, which is a pedestrian and traffic hazard. When fully occupied, and with the addition of the proposed 30-unit Curlew Court apartments, there will be a significant increase in kerb side parking on both sides of Thiele Street and Curlew Court, leaving only one centre traffic lane in Curlew Court. Increased traffic movement and manoeuvrability, particularly for service vehicles such as garbage trucks, in Curlew Court would add to congestion and noise stress experienced by the residents of the neighbourhood and to dangers to children playing in the street.

I have been living continuously at (WITHHELD) since December 1963 before the school was built. Ibis Street eventually became the southern boundary of Doncaster Secondary College. During this period I have witnessed the change to the secluded nature of the street and surrounding areas, from a semi-rural location to a pleasant residential suburb. This should not be destroyed by inappropriate development. The need for higher density living to accommodate Melbourne’s increasing population could be better served by the development of appropriate ‘town houses’ alongside existing single storey dwellings.
Name withheld.

Letter from a concerned resident to the Council…

We wish to object to the development for the following reasons:

The development on the corner of Thiele Street and Doncaster Road has set a precedent for the management of traffic and parking issues that will be caused by this proposed major development in Curlew Court.  That is, traffic and parking has not been successfully managed, and will only be worse in Curlew Court, which is not a through road.  Currently at almost any time of day or night, cars are parked on both sides of Thiele Street outside the apartment block, causing dangerous traffic concerns for residents, as cars turn from Doncaster Road (limit 70km) into Thiele Street (limit 50km).

I feel that this is dangerous, particularly on weekdays during school drop off, when parents and possibly staff from Doncaster Secondary College are proceeding down Thiele Street from Doncaster Road, and traffic comes virtually to a standstill while vehicles wait for their turn to drive through.

The proposed development is partly situated at the upper end of the court, almost in the bowl of the court, which means that residents of the development would have to drive further than half way along the court to access the property.   With 30 apartments (the vast majority being 2 bedroom), and only 36 spaces there will no doubt be parking overflow into the court.  We only have to look at the overflow from the existing development on Thiele Street to anticipate this.  We moved from an inner city residence to have the feature of ourselves and guests being able to park in front of our own property.

Traffic management during construction of the Thiele Street development can realistically be described as worst case scenario.  Traffic chaos was caused by construction vehicles, tradesmen’s’ vehicles and delivery trucks.  On numerous occasions, I could barely exit my driveway due to cars and assorted vehicles associated with construction parked on either side of my driveway and directly opposite.  My husband’s company car was even backed into by a delivery truck!  The top of Thiele Street was often totally blocked causing even further chaos.  When complaints were lodged with a Council representative, traffic control would be implemented by the development, however only for 1 or 2 days after the complaint was lodged.

This type of traffic chaos would only be compounded during construction in Curlew Court.   The Court was never designed or intended for this type of use, and one resident can even remember when Curlew Street became Curlew Court to restrict traffic flow.  We feel strongly that further increased and even current traffic flow is “an accident waited to happen.”

In Curlew Court, the majority of residents have made a concerted effort to get to know their neighbours.  Each year for the past four years, we have held a Christmas street party which has become a great opportunity to welcome and get to know new residents of Curlew Court, and also to catch up at leisure with existing residents.

We have some senior residents of Curlew Court who have been there right ‘from the beginning’ and even chose their block of land to build on.  They have raised their children in the Court, and now love to see and hear the latest generation of children playing in the Court.  It is a wonderful, safe environment  for all ages, with the residents / parents actively encouraging the children to all play together at each others’ homes and in the street.

We have our neighbours’ telephone numbers in case of emergency, and even hold spare house keys for each other. The most recent new residents to the Court have personally delivered gifts of food and treats for their new neighbours.

Other residents of Manningham and even those outside our municipality have commented to several residents on how fortunate we are to have neighbours our children can play with, and in a relatively safe and secure environment – our quiet Curlew Court.  With an interesting and dynamic mix of ages, family groups and ethnic backgrounds, Curlew Court truly represents the City of Manningham, and we are proud of the community spirit in our court and actively encourage this feeling in our local area.

We are not opposed to development as such, and we have many subdivided blocks in the Court, however do remain opposed to inappropriate and imposing multi unit developments that have the potential to detract from and negatively affect  the character and community of our Court.

Legal disclaimer: This information is provided as a summary and easy reference point to information. We will always evdevour to have accurate information, without the excess fluff from source information.

This information is intended to allow you to ask for more details from authorities, not to replace them. Always seek clarification. This is not a paid site, rather it is volunteered research and information. shared for those interested.