A SYMPTOM OF NO INTERCONNECTED STREET SYSTEM

“Square-block street grids are a fixture of modern urban life—as unremarkable as the clouds in the sky—and they’re rooted in far more planning than most people ever notice. From street width to block lengths, grid choices deeply affect the look and feel of our neighborhoods, and how we navigate them. They also determine how well a city can adapt to the times: once built, a street grid must support changes in transportation systems, building patterns, and infrastructure, while never losing its basic shape. Far from a static, boring layout choice, the grid is increasingly becoming a dynamic platform for cities—a process that will only accelerate as new tools come into use”.

Experts had warned Manningham Council that their Doncaster Hill strategy, when completed, could double the traffic congestion levels that existed prior to the construction of the Eastern Freeway extension because of its street layout. This is due to the sole reliance on the arterial roads, Doncaster Road and Tram Road/Fitzsimmons Lane, to enter or leave the area caused by the lack of an adjacent interlocking street network that would help reduce traffic congestion. Tram Road, which has only four traffic lanes, is the only route South or North is further impeded by the lack of service lanes for high rise apartment developments and future provision for the planned Metropolitan bike route.

Doncaster Road, with the massive Westfield extension, the Hotel and the Bunnings store and apartments still to be completed, is already experiencing traffic grid lock. There has been  a huge increase from the the original plan well beyond the area’s capability and as such demonstrates the need to have accepted a lower density development. By way of background, the Doncaster and Templestowe, as it was known then, was about to be divided among its neighbouring Municipalities as part of the State Government streamlining of local councils. State government had already dispensed with aldermen and appointed commissioners to all municipalities. As a result it was thought that by having a strategy up and running Manningham could stave off annexation which might explain the succession of tried and failed strategies during the period to help justify its existence and maintain the employment of officers and staff. Manningham pressed ahead with the Doncaster Hill development dispite its unsuitability. 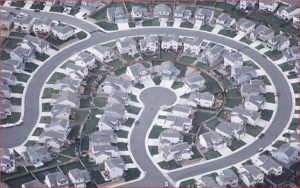 Manningham council were thrown a life line when the Melbourne 20/30 Activity Centre program calling upon councils throughout Melbourne to submit a plan in return for funding. The the government 20/30 planners were taken back by surprise at the speed in which Manningham had presented the Doncaster Hill strategy. The acceptance under the 20/30 umbrella gave Manningham access to government funding for the development while providing it with legitimacy. In government’s zeal to get the 20/30 plan underway it overlooked the lack of basic requirements for activity centres e.g. lack of infrastructure, no street grid for efficient traffic dispersion, no rail service (all other centres have train). unsuitable for the walking and cycling plan which has been canceled, narrow access roads and no plan to deliver public off-street parking.  Manningham averages two vehicles per household compared to the metropolitan average of 1.7 vehicles per household), which is a reflection of the limited of public transport options within the municipality exacerbated by the fact that up to 70% of permanent employment is outside the Municipal area.