Its breakthrough in 2015 was not in lifting nations up to higher levels of ambition, but rather in dropping expectations to the lowest common denominator. Oren Cass, senior fellow of the Manhattan Institute described it as somewhere between a farce and a fraud. Developing nations submitted uniformly meaningless commitments. They did not have to mention emissions…. in fact India had pledged to slow down their emission reduction! 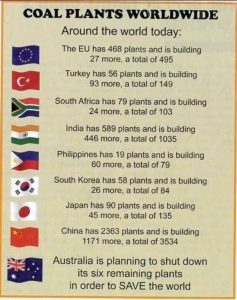 “China promised to reach peak emission around 2030, right when it was expected to anyway. India made no emissions commitment but pledged to improve its energy efficiency, less quickly than it already was improving. Many countries offered no meaningful baseline for comparison”. “Pakistan only “committed to reduce its emissions after reaching peak levels to the extent possible.” Yet no one complained. Each country’s pledges were accepted and stapled together and that was the Paris Agreement.

The IPCC have warned that climate change represents an urgent and a potentially irreversible threat to human societies and the planet. In recognition of this, the central aim is to pursue efforts to limit global temperature rise to no more than 1.5°C above average pre-industrial levels (1880-1900). In their reports they are unable say what the temperatures were during this period. The ABC, who have done their research on the subject, quote climate scientists as saying: “The methods used to record temperatures in 1896 (pre-industrial period were flawed” Which pretty much explains why the IPCC have no reliable climate for this period.

In an article the in New York Times “Ever-So-Slight Rise in Temperatures Led to a Record High in 1997” NOAA produced a graph showing the 1900 temperature at 61.50 Fahrenheit (16.38 Celsius). According to the data presented by Mr. Karl, combined land and ocean temperatures last year averaged three-quarters of a degree Fahrenheit above normal, 61.70 Fahrenheit (16.50 Celsius) the mean temperature for the years from 1961 to 1990; 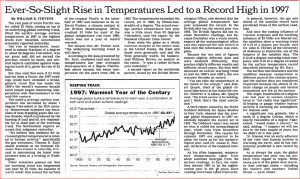 The temperatures exceeded the record, set in 1990, by fifteen-hundredths of a degree. The actual average surface temperature last year was a little more than 62 degrees Fahrenheit, (62.45 F actually) said the report by the National Climatic Data Center.National Oceanic and Atmospheric Administration, led by Tom Karl, had posted a global temperature of 62.45 degrees Fahrenheit (16.91 degrees Celsius) in the previous year. NOAA in its explanation for the higher reading in 1997, failed to mention it had been using the same method of measuring for 97 years, since 1900, when it recorded a global temperature of 61.50 F (16.38 C). So if 1.5 C is added the to 16.38 C the so called tipping point, based on these values, would be a ridiculous 17.88 C!! (64.18 F)