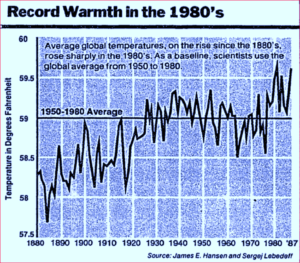 About this Archive: This is a copy of part of a digitized version of an article from The New York Times’s print archive, before the start of online publication in 1996. To preserve these articles as they originally appeared, The Times does not alter, edit or update them. Occasionally the digitization process introduces transcription errors or other problems; we are continuing to work to improve these archived versions.

Average global temperatures in the 1980’s are the highest measured since reliable records were first kept over 130 years ago, according to reports now coming in from scientists around the world.

Temperatures have been rising more or less steadily for much of the last century. But, in the view of some scientists, a sharper rise detected in the 1980’s is the most persuasive evidence yet that carbon dioxide and other industrial gases are trapping heat in the atmosphere and warming the earth as if it were a greenhouse

In interviews, meteorologists and others engaged in plotting global climate trends were cautious about blaming the greenhouse effect for the recent sharp increase, saying mathematical models of the phenomenon project much sharper increases than have so far occurred.

But several agreed that if the pattern persisted into the next decade, it would almost certainly mean that an era of global warming, caused by humans and certain to affect them in major ways, has begun. One of the scientists, Dr. E Hansen of the National Aeronautics and Space Administration’s Institute for Space Studies in Manhattan, said he used the 30 year period 1950-1980 when the average global temperature was 59 degrees Fahrenheit as a base to determine temperature variations. He said his readings showed that the average global temperature rose about as much since the base period as it did from the 1880’s to the base period-about half a degree in both cases. He stressed that these were estimates and that it would take millions of measurements to reach an accurate global average. ..end of article copied.

It was a rushed process.  Tom Wigley, an Australian Scientist, was part of a small group of scientists whose responsibility was to detect the extent of the man’s effect on climate…. in other words not whether or not but by how much. There was political pressure on the IPCC to remove the The Little Ice Age and Medieval Warm Period, vital before adopting Michael Mann’s flawed tree ring data (Mckitrick & McIntyre) and the IPCC obliged. As a result of all the shenanigans to produce a warming trend using higher temperature readings which had to be sufficiently inflated before the 1992 Rio climate conference.

Today’s global temperatures are much cooler even when applying the 20th century average temperature baseline, the highest temperature in the 21st century was 14. 84 C in 2016 which was raised to 14.90 C two years later and still more than 0ne degree Celsius cooler than the 1990’s temperatures and below some of the “hottest” temperatures recorded through 1987 to 1997.

The baseline periods used today are not much different. Some temperature monitors are using using the 1961- 1900 period which is about 14.00 C but most are using the 20th century average global temperature of 13.90 C. More recently they have used the degree of warming above the pre-industrial temperature average but don’t say precisely what it is, leaving them a wriggle room to “correct” readings. It begs the question why not reveal the correct temperature and be done with it?

There would surely have been pressure to remove or alter these embarrassing high temperatures records without success. To their credit The New York times have resolved to protect the integrity of their archived data.

These Global temperatures readings were published as soon as they were announced by the IPCC.